Office of the President Emeritus

Louis W. Sullivan, M.D., is chairman of the Washington, D.C.-based Sullivan Alliance to Transform America’s Health Professions.  In January 2020, in order to further increase diversity and transform health professions’ education and health delivery systems, the Board of the Sullivan Alliance voted to become a central program of the Association of Academic Health Centers (AAHC). In 2022, the AAHC merged into the Association of American Medical Colleges (AAMC).

In 1975, Dr. Sullivan was the founding dean and president of Morehouse School of Medicine, serving for more than two decades. He is now President Emeritus.

What's Current. What's In the News. What You Need to Know... 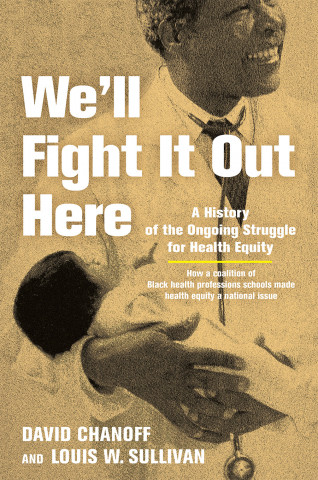 We’ll Fight It Out Here

A History of the Ongoing Struggle for Health Equity

Atlanta, GA, The Thomas J. Blocker Society will host the Living Legends Satcher – Sullivan gala at 7:30 pm on Friday, July 29, 2022, at the Intercontinental Buckhead Atlanta. The Living Legends Gala will be an exceptional evening of elegance and celebration in honor of two of our most notable alumni in healthcare, Drs. Satcher and Sullivan, preceding the 2022 National Medical Association’s Annual Convention in Atlanta. For over 50 years, each honoree has positively impacted the nation’s healthcare landscape. This celebration will befittingly pay tribute to these distinguished African American males for their outstanding contributions in medicine, medical education and improving diversity in healthcare.

This Black-tie tribute celebrating African American achievement is one of the most anticipated affairs of the NMA convention weekend but will also serve as a successful event supporting student scholarships and programming for the Thomas J. Blocker Society Foundation. To date, thanks to the investment of alumni and corporate sponsors, our Society has grossed more than $500,000 with net proceeds benefitting the Morehouse College Office of Health Professions and undergraduates interested in the health professions.

The Thomas J. Blocker Society and its nonprofit foundation has invited the National Medical Association, the Morehouse College, the Morehouse School of Medicine, and greater Atlanta medical and scientific communities to attend this wondrous occasion. Northside Hospital, other Atlanta health care systems and several corporate sponsors like OneAmerica and Northwestern Mutual are excited to sponsor this worthwhile event.

About The Thomas J. Blocker Society

In honor of this year’s #BlackHistoryMonth theme – Black Health and Wellness – United Therapeutics is  proud to highlight its Board of Directors Member, The Honorable Louis W. Sullivan, M.D.  Dr. Sullivan’s latest book, Let’s Fight it Out Here: America’s Black Health Professionals and the Legislative Battleground; Story of AMPHS will be published in September 2022.

Timely Discussion: Join a conversation with Former HHS Secretary Louis W. Sullivan, MD, Tuesday, February 22, at 4 p.m. ET, hosted by the National Academies of Sciences, Engineering, and Medicine. Dr. Sullivan will discuss his life and work promoting education, access to care, and the importance of diversifying health professions and medical education. The conversation is part of a series on Black individuals in science, engineering, and medicine.

Statement on the Passing of Archbishop Desmond Tutu of South Africa

“We mourn the passing of Archbishop Desmond Tutu, a great humanitarian and spiritual leader for South Africa and the world.

Archbishop Tutu was also a political force in South Africa, in the development of a new, democratic government with President Nelson Mandela. He chaired the Truth and Reconciliation Commission I South Africa to assure accountability for human rights abuses under the previous apartheid regime and to promote forgiveness and national unity in South Africa.

Morehouse School of Medicine was honored to have Archbishop Tutu give the commencement address to its graduating class in 1993, when he shared his wit, wisdom and life experiences. His legacy is that of a life well-lived, which inspired many people around the world.”

Statement of Condolence on the Death of U.S. Senator Jonny Isakson

“The State of Georgia and the Nation have lost a great leader and public servant in the passing of Senator Johnny Isakson.  I have lost a good friend and supporter.

Johnny believed in the mission of Morehouse School of Medicine, to increase the number of African American (and other minority) physicians to serve the citizens of Georgia and America.

We are grateful for his life of service.  We are a better state and a better country because of the contributions from Johnny Isakson.

We extend our heartfelt condolences to his wife, Diane and the Isakson family.”

“Ginger and I were saddened to learn about the passing of Bob Dole, one of our nation’s most outstanding public servants and political leaders.

When I arrived in Washington, D.C. in 1989, as George H.W. Bush’s nominee for U.S. Secretary of Health and Human Services (HHS), Bob and his wife, Elizabeth, were very welcoming to me and Ginger, helping us to learn about the city and its political culture.

As Senate Majority Leader, Bob was supportive of me, of the Department of  Health and Human Services and the Department’s many programs.

As a military veteran, he was appreciative of the service given to our country by members of the armed services.

In 2003, ten-years after my tenure as Secretary of HHS, Bob gave his time generously to serve as co-chair (along with former U. S. Congressman from Ohio, Louis Stokes) of the Sullivan Commission, a private, non-profit organization which I chaired.  Funded by the Kellogg Foundation, the Commission issued a report, “Missing Persons,” documenting the shortage of African American physicians in the nation and urging  a variety of actions to increase their numbers.

Bob Dole was a true patriot and a committed public servant.  We have a better nation because of his many contributions.

Ginger and I extend our condolences and our support to Libby and their family.”

“America and the world have lost a great leader and humanitarian with the passing of General Colin Powell.

I was privileged to meet and work with General Powell from 1989-1993, when he served as chairman of the joint chiefs of staff of the U.S. Military Services and I was secretary of the U.S. Department of Health and Human Services during the administration of George H.W. Bush. Powell was an articulate spokesperson, respected military leader and valued member of the Bush 41 leadership team. His leadership was clear with the rapid success in removing the Iraqi troops from Kuwait in 1991, with minimal casualties or economic disruption. His subsequent contributions as secretary of state under George W. Bush are well known.

As President of Morehouse School of Medicine, I was pleased to welcome him as our commencement speaker in 1994, when he inspired our graduates, faculty and administration with his words and his deeds.

Ginger joins me in sending our sincere condolences to his wife, Alma Powell and other members of his family at this sad time. We thank Colin Powell for his service — which he brought to the nation with distinction.”

The COVID-19 pandemic currently ravaging our society demonstrates starkly that our system is not working as it should. Our society needs trusted institutions and individuals in efforts to achieve the levels of vaccination needed to successfully end the pandemic.

In 2020, we saw the remarkable development of vaccines for the COVID-19 virus with strong scientific rigor and high ethical standards in record time. But the resulting vaccines have been met with a high degree of skepticism, suspicion, and mistrust by our citizens, especially people of color (Black, Latino and Native Americans). Thus, these scientific and technological developments are in danger of not achieving their purpose because of mistrust, misinformation and misunderstanding among Americans. A clear need in 2021 and beyond is better health literacy and improved health behavior of our citizens. Public health professionals have emphasized the substantial gains to be made in extending our years of healthy life, along with significant reductions in illness and injury. 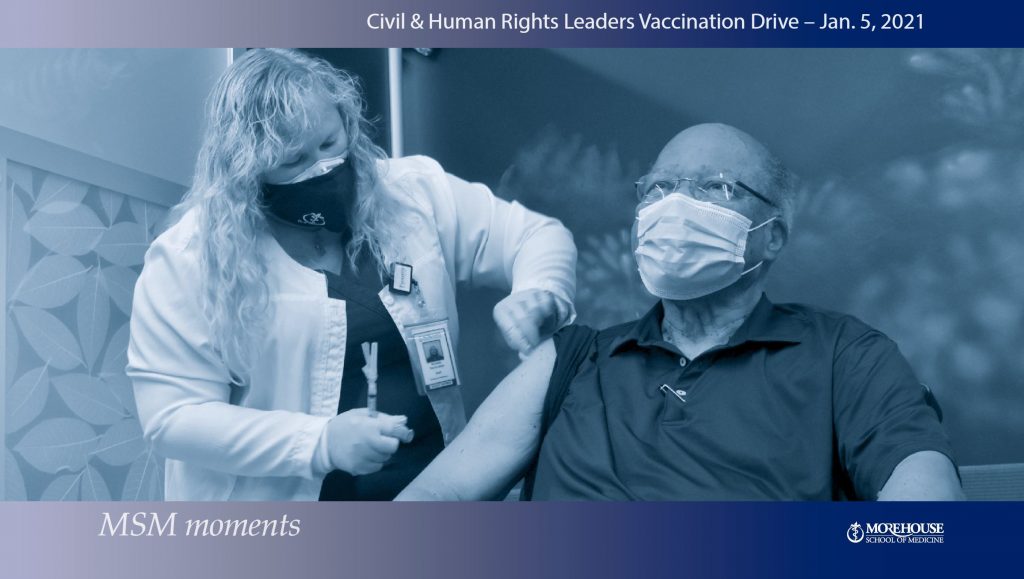 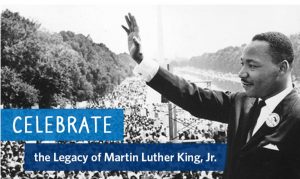 Please register for this Zoom meeting

All members of the BU Medical Campus community are invited to a special presentation commemorating the legacy of Rev. Martin Luther King, Jr.

A Life of Service In Healthcare, And Why It’s Important In Today’s World

A 1958 graduate of BUSM and former faculty member who currently is a member of the BUSM Dean’s Advisory Board, Dr. Sullivan is the founding dean and first president of Morehouse School of Medicine (now president emeritus). He served as Secretary of Health and Human Services during the George H. W. Bush administration. He is chair of the board of the Washington, D.C.–based Sullivan Alliance to Transform America’s Health Professions. He also is author of The Morehouse Mystique: Becoming a Doctor at the Nation’s Newest African American Medical School (with Marybeth Gasman; Johns Hopkins University Press) and “Breaking Ground: My Life in Medicine (with David Chanoff; University of Georgia Press). He is a member of the National Academy of Medicine. 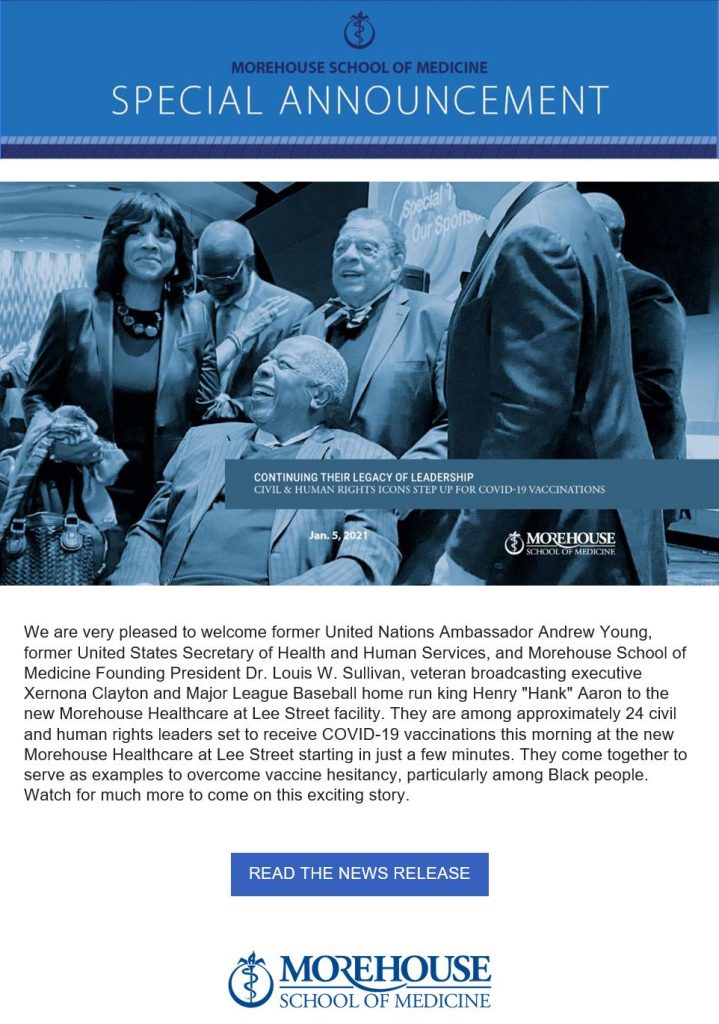 Statement from Louis W. Sullivan, M.D.
in Support of the Student Coalition for Social Equality
June 18, 2020

I commend the Student Coalition for Social Equality at Morehouse School of Medicine (MSM) for its leadership in organizing the peaceful protest on June 19th to focus on improving the health of the nation’s minority and medically underserved populations.

MSM’s students today are building on the legacy of MSM’s alumni, who are providing medical services to our citizens, including those alumni who have served as Surgeon General of the U.S. Public Health Service (Regina Benjamin, M.D.), President of SUNY Downstate Health Sciences University (Wayne Riley, M.D.), Commissioner of Community Health for the State of Georgia (Rhonda Medows, M.D.), and many other alumni.

All of us must continue to provide the leadership and service needed for Georgia, our country and the world, as we work for improved health for all, for more health equity and for a better world.

Let Us Trust Our Medical and Scientific Professionals

Confronting the pandemic resulting from the corona virus, President Trump has stated that “we are at war” with this infectious agent.

As a physician, former president of a medical school and former U.S. Secretary of Health and Human Services, I want to strongly commend the valuable scientific and professional leadership given to the nation by our men and women in the U.S. Public Health Service during this crisis.

The expertise of Dr. Anthony Fauci of NIH, Dr. Deborah Birx at the White House and Dr. Robert Redfield at CDC is being utilized by our elected officials to help our nation navigate through the existential threat we are facing from this virus.

This episode shows our citizens and our elected officials – the president, members of congress, governors, state legislators, and others – the importance of investing in scientific research and health professions training so that our nation is more capable of a creative and nimble response to the threat from a new enemy, the corona virus 19.

I urge everyone, beginning with the president, the congress, all our elected leaders, our business leaders and non-profit leaders, — indeed, all of our citizens — to listen carefully to Dr. Fauci and his colleagues, and to follow their reasoned and data-informed advice.

This is a test of our society. We must succeed in this effort. We will, if we believe in – and if we trust – our health and scientific professionals.

A collection of op-eds and blog entries from Louis W. Sullivan
Read The Blog